On December 12, the ALS Governing Board said farewell to two board members who are leaving the ALS Board at the end of this year after many years of service. Audrey Stattelman has represented Cook County on the ALS Board since 2009, and Steve Bean from the Itasca Community College has represented Academic Libraries on the ALS Board since 2012. As a show of gratitude for their service, ALS Board President Marge McPeak (Saint Louis County) and ALS Assistant Director Shari Fisher presented the departing members with a small gift as well as their own images on a READ poster. 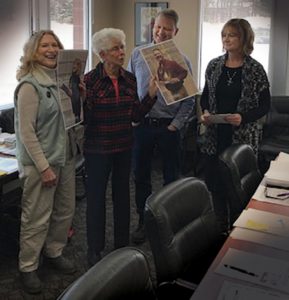 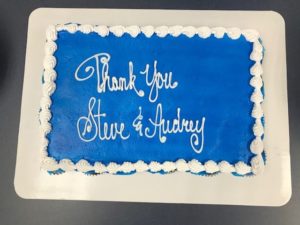 On December 12, the ALS Board also elected Dennis Jerome from Itasca County as the ALS Board President for 2020, replacing Marge McPeak who has ably served the board in so many ways. Lenore Johnson of Lake County was re-elected for another term as the Secretary for the Board. Amanda Houle (K-12 School Libraries) will continue as Chair of the Budget Committee, Ms. McPeak will chair the Personnel Committee, and Christopher Welter from the Iron Range Research Center at the Minnesota Discovery Center will chair the Governance Committee. Mr. Welter represents Special Libraries on the Board.

The staff at the Arrowhead Library System would like to thank everyone who has served on the ALS Board for their dedication to and support of libraries!