Tom Rukavina represented the Iron Range in Minnesota’s House of Representatives from 1987 until retiring in 2012. He then served as a Saint Louis County Commissioner from 2015 until 2018. Although he passed away earlier this year, throughout his career he remained a strong advocate for libraries. The Arrowhead Library System has recognized Rukavina’s long support by displaying a READ poster in the ALS Board Room that features Rukavina holding one of his favorite books, the 2001 biography of Teddy Roosevelt titled Theodore Rex, by Edmund Morris. When asked about his choice of a book, Rukavina acknowledged that Theodore Roosevelt was a Republican, but added that “Teddy was a Populist and that’s what matters.” Pictured in the photo with her father’s poster is Ida Rukavina, a staff member from the office of Us. Senator Amy Klobuchar. Tom Rukavina’s passion and support will not soon be forgotten! 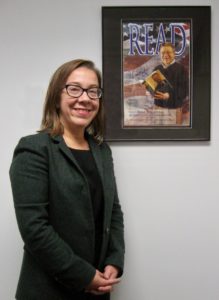