In December, Senator Dave Tomassoni and Representative Dave Lislegard visited the ALS headquarters in Mountain Iron and made a point of viewing the poster of the late Congressman Jim Oberstar. The Congressman represented northeastern Minnesota in the United States House of Representatives from 1975 until leaving office in January 2011. Congressman Oberstar was a strong supporter of library services and reading, and his office was a help to the Arrowhead Library System on many occasions. His poster features the Congressman holding one of his favorite books, The Once and Future King by T.H. White. 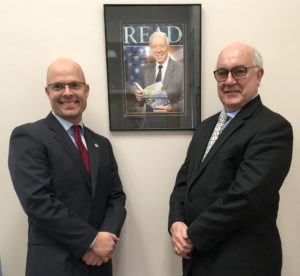