Project: Pirate Party in the Park 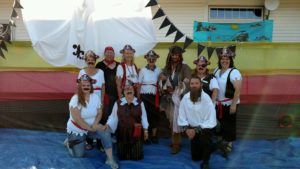 Calumet Library wanted to have an educational event that brought in families with children of all ages for the summer of 2018.  We found Minnesota’s Jack Sparrow, Joshua Godfredson, who does a brilliant job as an impersonator of Captain Jack Sparrow. He thrilled many of the children and even many adults. MN Jack Sparrow keeps things very real and authentic with his moves, voice, and costume. His knowledge of pirate history was incredible so he tested us with pirate trivia. He also demonstrated sword fighting with foam swords, “pirate talk” and even led us on a scavenger hunt. The Calumet Library Crew set the stage for Jack Sparrow by constructing a ship as a stage. We also had fun by dressing in pirate costumes. We had a few photo booths for picture taking along with face painting, too. We served pirate snacks! The treasure hunt was enjoyed by all of the children as they went running around the park to get the clues (even walking the plank) and ended at the treasure chest on the ship.  MN Jack Sparrow did an incredible job of educating and entertaining at our event. He does an awesome job interacting with the audience before, during, and after the program. We had a great response and have heard from many more that missed out. 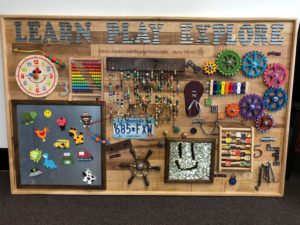 The Chisholm Public Library gadget wall will provide the kids with a passive activity at the Library. It will bring in a level of excitement with something new and entertaining, but also provides education by increasing fine motor skills and making everyday objects accessible for kids. We will measure this by listening to our patrons feedback and making note of the usage.  We believe this can provide sensory play which supports language development, cognitive growth, motor skills, problem solving skills and social interaction. We also hope this brings in new families to check out our great space.  We have had several new patrons stop in to view the gadget wall.  There seems to be some new chatter about it since it hit the front page of the newspaper!  Very positive feedback from everyone that has seen it so far.  Lots of comments – “I wish I had one!”  The kids love it! 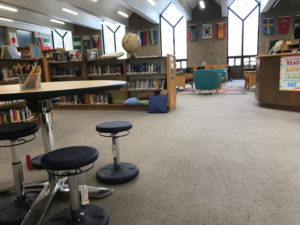 While reviewing and revising our current facility plan earlier this summer, we clearly recognized a need for more flexible seating options in our Library. This need was greatest with our younger students in grades 4, 5, and 6. We have a lot of traditional seating options that our students use in maybe non-traditional ways to achieve what they need (ie. tipping chairs back on two legs for movement, lying on the floor under a table to read, or sitting backwards on the computer chairs). With the help of the ALS Mini Grant, we were able to secure permission and funding to create a new seating area in the Library that includes four Kore Wobble Stools and a set of six Cuddle-Ups floor pillows. Separately, we were also able to add two more chairs to expand our soft seating area. While these changes did not replace or reduce the traditional seating, we did double the variety of seating options available.

Overall, there has been a very positive response to our new seating options! The new Kore Wobble Stools are used regularly throughout the day by middle school students, upper school students, and even some of our teaching faculty. Many of our 5th and 6th grade students enjoy the Wobble Stools for reading (though they take a little getting used to) and our 4th grade students are especially drawn to the floor pillows for reading. I’ve had two middle school teachers ask if the Kore Wobble Stools would work in their classrooms – which tells me that there is value to both having flexible seating as well as providing an example of flexible, active seating that isn’t as potentially disruptive as other options. One unexpected benefit has been the use of the Wobble Stools by our upper school students. I placed the stools at our coloring table, which has seen waning interest in the last year or so. With the addition of the Wobble Stools, more upper school students have taken the opportunity to test out the new stools, sit for a little while, and color a bookmark or two. (I’ve already had to order new markers and more bookmarks.) One of my favorite quotes from a student thus far: “Ms. Houle, these are awesome! I can keep moving even when I’m sitting down. But don’t try to sit on them with your backpack. I made that mistake the first time.” From one of our middle school teachers: “These are great; I wonder if I can get them for my classroom…” From a 4th grader: “These squishy pillows make library time so comfy!”

Hoyt Lakes Library has partnered, through a grant, with the North Dakota State Library, Prenda, ARSL, Linda Braun (YALSA), and Crystle Martin, to provide a coding club for ages 8-14 in our community. This will be a two-year project of weekly sessions held at our library. In planning to hold a Code Club at our library, we realized our desktop computers are becoming outdated and some are not so reliable. In researching options for Coding, Chromebooks were recommended as a great alternative. Our first session was held on 9/25, and we had more kids than old computers. If not for the new Chromebook, some kids would have needed to share and not been able to have as much hands on learning as they did. We are very grateful to Arrowhead for this grant. Because every child was able to be on their own computer, they are excited to come back and continue learning to Code.

The Buhl Public Library ordered several STEM based toys for young patrons to use while in the Library. These toys included building bricks, contraptions sets, and straws that can be interconnected and manipulated into different shapes. The Library also ordered a programmable Code&Go Mouse that teaches children the basics of computer programming.  Young patrons utilize STEM skills in building, creating, and programming with the new items. Library staff keeps track of how often the STEM toys are utilized by patrons, and what age group those patrons fall into.  So far, the STEM items have been used by patrons by youth ages 5-10 years old and the kids have been really excited when they realize that they can play with the items.