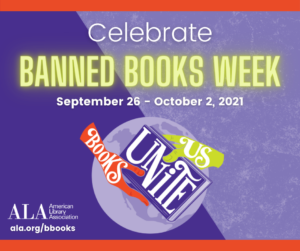 A Message from the American Library Association’s Office for Intellectual Freedom:

At a time when LGBTQIA+ books and books that focus on racism and racial justice are challenged for removal from library and school bookshelves, this year’s Banned Books Week, Sept. 26 – Oct. 2, is a reminder of the unifying power of stories and the divisiveness of censorship. This year’s theme is “Books Unite Us. Censorship Divides Us.” and it underscores how books reach across boundaries and build connections between readers.  Banned Books Week brings together the entire book community, including librarians, booksellers, publishers, journalists, teachers, and readers of all types, supporting the freedom to seek out, read and express ideas, even ideas that contain uncomfortable truths.

During the week, the American Library Association (ALA) and libraries across the country will commemorate the freedom to read while calling attention to attempts to quash books that share the stories of people who are gay, trans, Black, Indigenous, and people of color, immigrants, and refugees.

“Having the freedom to read, especially books that extend beyond our own experiences, expands our world and the ability to celebrate our differences,” said ALA President Patty Wong. “Sharing stories that are important to us means sharing a part of ourselves which fosters understanding and inclusion. We should not take the freedom to read for granted and encourage communities everywhere to stand up against censorship and read a challenged or banned book.”

In 2020, the Office for Intellectual Freedom (OIF) tracked 156 challenges to library, school, and university materials and services, affecting 273 books. The office also noted a focus on demands to remove books that addressed racism and racial justice or those that shared the stories of Black, Indigenous, or people of color.  Libraries will celebrate Banned Books Week with events that highlight titles that appear on the ALA’s 2020 Top 10 Most Challenged Books.  Banned award-winning bestselling author Jason Reynolds is the inaugural Banned Books Week 2021 Honorary Chair. Reynolds is the author of more than a dozen books for young people. Recently two of Reynolds’ books, “All American Boys” (with Brendan Kiely) and “Stamped: Racism, Antiracism, and You” (with Ibram X. Kendi), were among the Top 10 Most Challenged Books of 2020. Readers can join Reynolds for a live-streamed conversation on Sept. 28, from 12 – 1 p.m. CT on the Banned Books Week Facebook page. Reynolds will discuss censorship, young people’s literature, and the ways that books bring people together. The Banned Books Week Coalition, which includes the ALA, will host the event.

Other celebration highlights include ALA’s annual Dear Banned Author program that invites readers to send tweets and letters to authors. ALA also will continue to host its Stand for the Banned Read-out, where participants submit videos of themselves reading from banned and challenged titles. Video submissions will appear on the Banned Books Week YouTube channel.  Typically held during the last week of September, Banned Books Week spotlights current and historical attempts to censor books in libraries and schools. Censorship remains a persistent threat to our freedom to read through attempts to ban or restrict books based on a person’s or group’s objections to stories, opinions, and ideas with which they disagree.  Additional information regarding Banned Books Week and celebrations is available at ala.org/bbooks, or follow Banned Books Week on Facebook, Twitter, YouTube, and Instagram to get the latest updates.